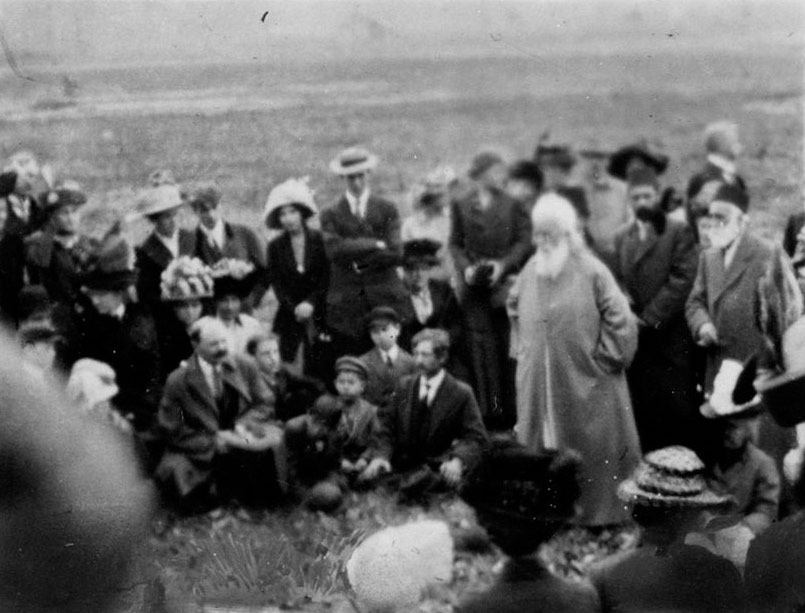 When Abdu’l-Baha Declared ‘The Temple Is Already Built’

After the talk ‘Abdu’l-Bahá, followed by His audience, left the tent and requested that Nettie Tobin’s stone be brought to Him. The stone had been lying several feet northwest of the tent and had probably been pointed out to Him by Corinne True earlier. He walked back and forth on the property and, after asking where the center of the land would be, turned to someone who showed Him the approximate point. As the stone was being carried to where ‘Abdu’l-Bahá stood, Irene Holmes of New York stepped forward and handed Him a leather case. Inside was a golden trowel she had hoped would be used for laying a cornerstone within the foundation of the building. ‘Abdu’l-Bahá tried to use the trowel to dig a resting place for the dedication stone, but it was too dull to cut through the spring grass. He placed the trowel in its case and asked for more practical tools. When it was discovered that plans had not been made to have such tools available, one of the young men ran to a nearby house to borrow an ax. “Like an athlete”, ‘Abdu’l-Bahá took it and “swung it high in the air.” “After several blows,” wrote Louise Waite, He “cut through the resisting turf and reached the earth below.”

The scene inspired the Bahá’ís to sing-first the “Benediction” and then “Tell the Wondrous Story,” both written by Mrs. Waite. In the meantime another young man, Herbert Anderson of Chicago, had run west on Linden Avenue in search of a shovel. He found a work crew on the Northwestern Elevated tracks about four blocks south of Linden Avenue, near Isabella Street, and convinced them to loan him one of their shovels, which he whisked back to the ceremony. As the shovel was handed to ‘Abdu’l-Bahá, Corinne True reportedly stepped forward and encouraged Him to let a woman participate in the ceremony. Turning to Lua Getsinger, He bade her to come forward despite her resistance. It was not until He called her a second time that she responded, grasped the shovel, and turned the first earth. Following her was Corinne True, after which, one by one, individuals of many races and nationalities-Persian, Syrian, Egyptian, Indian, North American Indian, Japanese, South African, English, French, German, Dutch, Norwegian, Swedish, Danish, Jewish-were called forward to participate in the digging. Now that a rather large hole had been dug, ‘Abdu’l-Bahá reached down and scooped up handfuls of dirt, which He shared with several individuals.

Then He “consigned the stone to its excavation, on behalf of all the people of the world.” After retrieving the golden trowel, He pushed the earth back around the stone and declared: “The Temple is already built.”