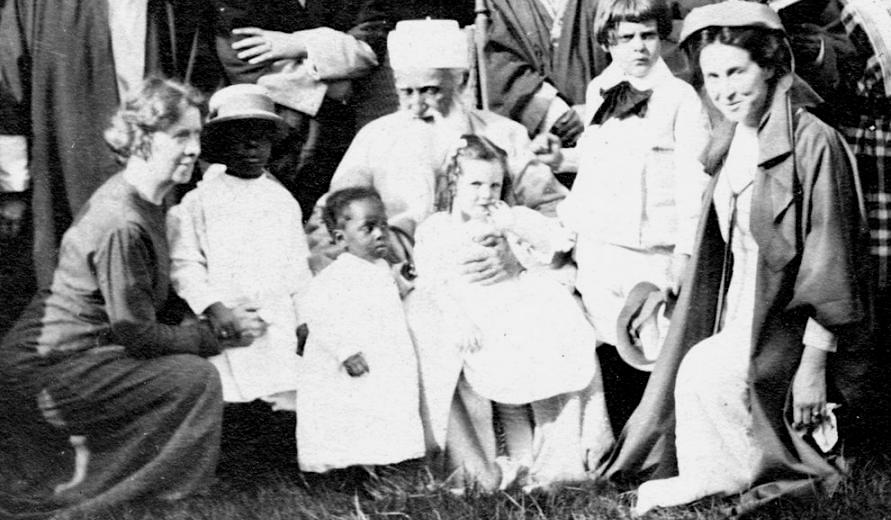 ‘Welcome to the Kingdom!’

There are many stories about beloved Grace Robarts Ober who, for so very many years, dedicated every moment of her life to the service of our glorious Cause. And this experience, she felt, was the ‘first small step’ – to use her words, that set her feet on the path.

Grace had been introduced to the Cause by that early dedicated soul, Lua Getzinger, and Grace had, at once, recognized Baha’u’llah and become a Baha’i. Not long afterward, Lua came to Grace and told her that very soon Abdu’l-Baha was to arrive in New York and she, Lua, had been asked by Him to go to Chicago and prepare a place there in which he might stay when he arrived in that city. Would Grace like to go to Chicago with Lua and help with this preparation? Of course Grace would! So, together, they went to Chicago from Los Angeles, found a suitable apartment, prepared it and, eventually, Abdu’l-Baha came to live in it.

When His stay in Chicago was nearly over, suddenly one morning Grace realized what it would mean to go back to the dead stuffiness of her former life and leave this clear and radiant glory in which she’d been living while she helped Lua keep house for the Master. So she went to Abdu’l-Baha and begged that, when he returned to New York, she might help with that household too, as she had been privileged to do in Chicago. Abdu’l-Baha looked at her very searchingly and said, “Greece (His loving nickname for Grace), are you sure you wish to serve me?” Grace said, with great enthusiasm, “Oh, yes! More than anything else in the world!” Abdu’l-Baha made no answer but walked away. The next morning this scene was repeated. On the third morning, Grace, frantic at the realization that this was the last morning before He was leaving to go farther West, went to Him a third time – and this time He became very stern. Are you very sure you wish to serve Me? Grace was startled at the sternness but she didn’t waver. “Yes I am very sure.” So then he nodded. “Very well. Go, settle up your affairs, and we will meet in New York.” Jubilant and radiant, Grace settled up her ‘affairs’ – which consisted of subletting a cottage she had taken at Greenacre for the summer and doing a few other things. Then, with wings on her feet, she went to New York. Lua was already there and together they prepared for Abdu’l-Baha’s return. The day came. Many Baha’is had gone to meet Him, though Lua and Grace had remained at the house to welcome Him. The door opened, He came in. He welcomed Lua warmly, glanced at Grace as at a complete stranger, and turned away. Grace was appalled, shocked. Hadn’t He recognized her? Had He forgotten her? Had she misunderstood the permission to come to New York? Or had she displeased Him and was this punishment?

Whatever it was, it continued with no let-up. During all the days that followed Abdu’l-Baha never showed by word or glance that He recognized her in any way – except to put her to work. Whenever she relaxed at all throughout any day, word would come at once, through Lua, setting her to work harder at some new task. She worked in that household until long after midnight – cleaning, cooking, scrubbing, and then she would rise at five in the morning to begin all over again. She worked as she had never worked before in all her life and Abdu’l-Baha ignored her completely. If they ever chanced to meet he would draw aside His robe for her to pass and his glance would go through her as if she were not there.

At last came the day when the movies of Abdu’l-Baha were to be taken over in Brooklyn at the home of Howard MacNutt. And Grace thought, wearily, “at least I will be included in this since everyone in the household is to go.” But, an hour before the several carloads of people were scheduled to leave, Lua came to Grace to say that Abdu’l-Baha felt that someone should remain at the house to welcome two ladies who were expected that morning, and Grace was to be the one to stay behind. So when the cars left – Grace stood at the top of the flight of brownstone steps and watched them all roll away. Then, she turned and went into the empty house. For a moment she stood there, fighting the feeling of desolation and abandonment and loneliness, and then she thought of the white roses that had been delivered that morning, as they were daily, for Abdu’l- Baha’s room. The one bright spot in these dreadful days for Grace had been that she was the one to arrange these roses each morning. So, with the long florists’ box in her arms, she climbed up to Abdu’l-Baha’s room at the top of the house, where He had wished to be. She reached the top of the third flight – and found the door not only closed, but locked against her. And always before it had stood wide open! This, for Grace, was the last straw. Overwhelmed by all the hurt and bewilderment of all these days, she sank down on the floor and wept with the fallen roses scattered around her. At last, the sobs faded, her tears spent themselves, and, exhausted, she gathered up the roses and went back downstairs.

The expected ladies had not arrived, nor did they ever arrive. But Grace – it was now past noon – was hungry. So, she went down to the kitchen to get something to eat. And in that house that fed, each day, so many dozens of people, there was nothing to eat but one egg and a small piece of leftover bread in Abdu’l-Baha’s bread-box. (this bread was especially baked for Him by a Persian believer who had begged to come on this journey just so he might cook Abdu’l-Baha’s food). So Grace boiled her one egg and put her small portion of bread on a plate. Putting the egg in an egg cup, she chipped the shell – and the egg, as bad as an egg can get, exploded in her face. She cleaned up the mess and returned to her bit of leftover bread. And, as she crumbled the bread, eating it crumb by crumb she realized, suddenly, exactly what she was doing – she was, blessedly, eating the crumbs of the bread of life from Abdu’l-Baha’s table. She began to eat even more slowly as the spirit of prayer came to possess her.

Not long after this the household returned from Brooklyn – and that evening Lua came to Grace and said, “The Master has asked me to tell you that He knows you wept.” And this was the first time it had occurred to Grace that all this dreadful experience might have a reason, a pattern. And – if this were true she must find out what the reason could be. So she went up to her room to pray about it. To pray for illumination and wisdom and the selflessness to understand. And as she prayed she heard a small voice saying ‘Are you as happy scrubbing the garbage pails as you are arranging the roses?’ And she suddenly realized what the spirit of true service was. It was to rise to selfless joy in offering the service, no matter what form that service might take.

And as this truth swept over her, suffusing her, illuminating her, the door opened, and Abdu’l-Baha walked into the room. His arms were outstretched; His dear face was glorified. “Welcome!” He cried to Grace, “Welcome to the Kingdom!” And he held her close, embracing her deeply. And never did He withdraw Himself from her again.